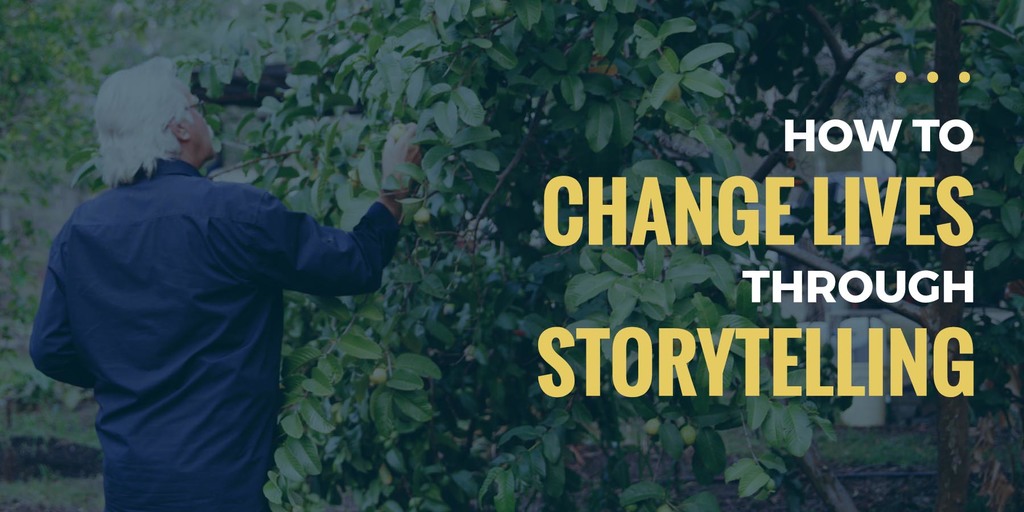 How to Change the Lives of Your Audience Through Storytelling

When you hear those six words, you’re hooked. What is it about a good story that draws us to it so easily? Some might say it’s because they’re so entertaining. Others might think that it’s in our nature to want to know what’s going on in someone else’s life..

Why We Love Stories

Why do we love stories? There’s a biological reason for it. Our brains are hardwired to respond to stories. Because we’re social beings, stories are of great relevance to us. According to experts, stories with a personal and emotional element to it are deemed more effective. We easily remember a story that makes us cry, gets us angry or causes ecstatic joy. Try as you might, you’ll even remember a story if you don’t want to!

Of course, not all stories work this way. I’ve heard it said that we are bombarded with approximately 4,000 to 10,000 advertisements a day and thousands of stories. But why don’t we remember all of them? And what is it about those that we do remember that stick?

I stumbled upon this interesting video by the Future of Storytelling about how stories affect us. At the deepest core, stories connect with us on a biological level. When we hear stories that draw us in, our body starts to develop two chemicals. They are cortisol and oxytocin.

Cortisol is the hormone that gets us to focus and pay attention. It’s the hormone associated with stress. Oxytocin on the other hand is the hormone that makes us feel empathy. When we’re shot with these two chemicals, we start to experience a strong connection to something or someone. Many times when we hear stories we love, that’s what happens. What does that tell us? That we are beings with an embedded attachment to story.

Stories that Change Us

In 359 BC, Philip II of Macedon was assassinated. It happened in Aegae on the day Cleopatra of Macedon, his daughter by his fourth wife, was to be wed to Alexander I of Epirus. Philip was entering the town’s theatre unarmed when Pausanias of Orestis, one of his seven bodyguards, stabbed him and escaped.

After Philip II was killed, his son took the throne. Many people thought he was still too young to rule, but Philip’s son proved them all wrong when he grew his father’s empire to one of the largest the world had ever seen. His greatest weapon? It was a story. A long epic that had been passed down to him by his teachers and mentors.

Philip’s son was Alexander the Great. And the story that inspired many of his conquests was the Iliad, which BBC Culture marked one of the 100 most influential stories of all time. It’s hard to imagine how much impact a story would have on history. But the reason it’s so powerful is how it changes us.

When we react to stories we love and fixate on them, they start to do something in us. It’s been said that the best way to draw people into your idea and to potentially buy into it, is to use story.

Much to our dismay, there are forces and organisations that use this power for the wrong reasons. Politicians who manipulate people for favour and support only to corrupt the system, marketing corporations who oversell products and services that could actually be bad for you, or even just that neighbour that manipulates you to get what they want.

Chip and Dan Heath put it this way in their book, “Made to Stick”- “The story’s power, then, is twofold: It provides simulation (knowledge about how to act) and inspiration (motivation to act).” When stories are unleashed they have the ability to affect the way we think, feel and even act.

Stories are influential. Period. Some people use them for great evil. But in the same light, there are those that use them for great good. Think of how Martin Luther King, Jr. used the “I have a dream” vision story to break down racial discrimination in America.

Think about all the great TED talks, inspiring videos on YouTube, powerful documentaries, or pocket books. Or how about the fables and children’s stories that help us teach our youth moral lessons that shape their character? I grew up with stories from the “Bernstein Bears” series from which I learned important lessons like refusing to throw a tantrum, being compassionate to those in need, working hard and many more great lessons. I’m sure you have your favourite bedtime stories that helped you ponder and wander too.

If you really think deeply about it, the stories that we heard growing up were powerful agents of change that formed us into who we are today. What changed your life a catalyst who told you a story. You changed either for better or for worse depending on what kind of stories you heard. But at the end of the day, you changed.

How Stories Change Us

One could think that stories are just a collection of words that solely exist as a means of passing on information. But it’s so much more than that. Stories are the vehicles that inspire movements, build empires, cities and change the world.

1. Stories reveal who we are

It’s funny how you can take the same person and elicit two different responses based on the stories that he or she hears. Say for example you’re a basketball fan. You come across a news article on your Facebook Newsfeed that narrates how your favourite team went on to win the finals of a long-standing playoff series. And right under the link to that article is a book review on “Crazy Rich Asians,” which you have no intention of clicking.

What happens next. is a little scary! Facebook records which site you clicked on. The next time you browse through your Newsfeed, Facebook’s algorithm removes anything that has to do with romantic pocketbooks and bombards you with ads that will sell you NBA championship merchandise.

What just happened there? The power of story just revealed who you are. The kinds of stories we respond to speak loudly. And everywhere there are professional “mind readers” who find ways to find out who you are and get you to do something they want you to do.

You can use the power of story to learn more about people. You can learn so many things as the storyteller- just as much as people learn from you. Businesses do it all the time. When they want to understand who their target market is, they draw them in with a story. Only then do successful businesses follow up with by an ad, a discount and an offer. It’s like bait waiting for the next bite. That’s powerful stuff right there.

Simon Sinek’s talk, “How Great Leaders Inspire Action,” is one of TED’s most watched videos to date. With over 42,000,000 views, there’s a good reason reason why the video went viral- because it’s super good.

In his keynote, Simon shared a seemingly simple yet powerful rationale to why leaders should communicate their “why.” Your why can inspire people to action. Note that it’s not money, not power, not authority that inspires people according to Simon. It’s a story- more specifically a story about your “why.”

Muse Storytelling teaches that a values story is a powerful way to win people’s hearts. It presents the values- the why’s- that motivate you, your business, your advocacy or your movement. If you want people to connect at a deep level, connect with them through their values. That’s because these kinds of stories inspire us.

At the deepest level, leadership is about motivating people to move- to take action. A motivational coach needs to get people to sign up to their online course or coaching sessions to make an impact in their lives. Non-profits need people to believe in and even give to a certain cause. Stories help us encourage people to take that action.

Think again about the “I have a dream” speech by MLKJ. What was so powerful about it? It’s because that speech painted a compelling vision story. He didn’t just shout on a microphone. He united all the African-Americans to come together and stand against racial discrimination. Much closer to home is the National Apology Prime Minister Kevin Rudd. Once when he delivered to Indigenous Australians, it brought people together. It brought together Australians of different origins and made the nation a more unified one.

Stories can unify families, departments, cities and even countries. The power of a story to bring together and build community goes way back to the times when people would gather around the oldest members of the tribe to listen to the story of the community’s origins.

There is a deep-seated level of connection to our beginnings. Origin stories connect us to that. I can recall when we made an origin story film for Macadamia Australia. Showing it to the stakeholders was almost magical. You could see the sparkle in their eyes as they looked back to how the journey started for them.

Stories can bring us together to form communities where people will find meaning and belongingness. As a result, people’s lives will be changed.

We all search for a stable identity. Self-awareness, according to Maslow’s hierarchy of needs, is the highest form of satisfaction that we have. And how do we get to a level of self-awareness? It goes back to stories. We connect with stories because they expose us to the truth of who we are.

Why, for instance, do we feel a deep sense of connection to stories and films about underdogs? Because for most of us, that’s our story. We want to connect with a story that tells us about our challenges, triumphs, desires, conflicts and dreams. We connect with stories because they help define for us who we truly are and who we want to be.

How does one apply that into reality? If you’re a charity trying to win people over to your cause, help people figure out why they connect with your advocacy. If you’re a business selling a product, make people see what true deep seated need of identity your product gives. Why do they buy your products? If you’re an employer, give your people a sense of pride by telling the stories of people who have succeeded as employees of your organisation. There are numerous ways to help give people definition as we tell stories.

Conclusion: Stories cause shifts in history

There are numerous ways to change lives for sure. I don’t want you to think that money, brute force, laws and large-scale events don’t change lives. But none of these are nearly as inspiring as the power that stories have. You can force or manipulate people all you want, but at the deepest core they won’t really believe you.  Stories can help do that better.

Tony Robbins once said, “The only limit to your impact is your imagination and commitment.” Let me leave you with two questions: Are you committed to making an impact in the lives of your audience? And are you equipped with the imagination and creativity to do it in the best way possible? If you’re answer to both is “yes,” then you will be able to change people’s lives for the better. And one of the best ways you can do that is through storytelling.