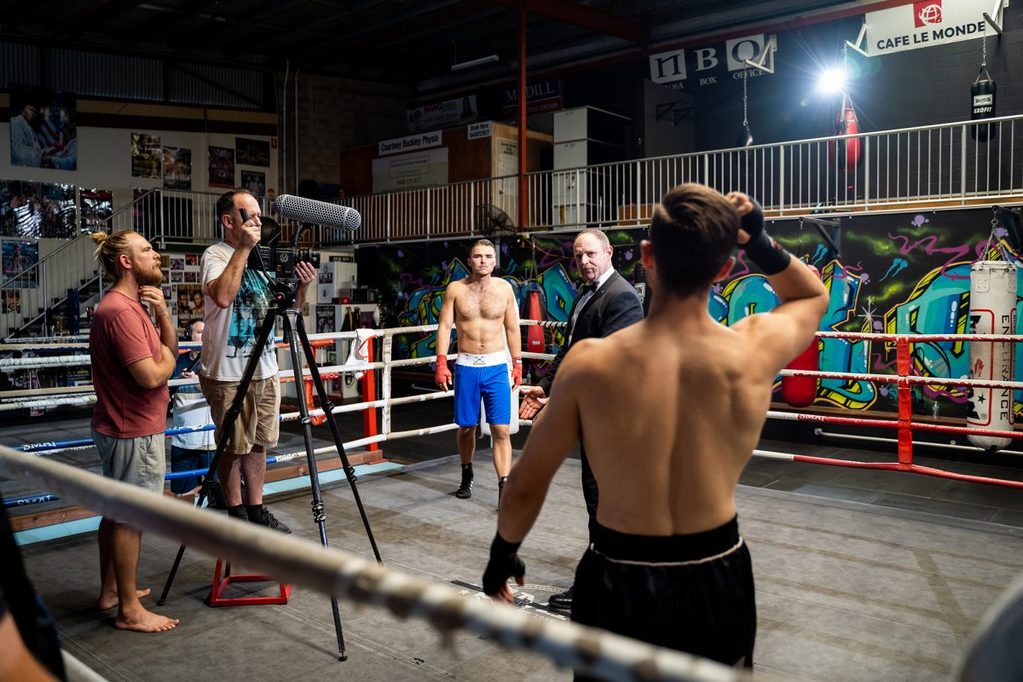 We want more filmmakers and more serious work on the coast, so we’re genuinely committed to the development of our industry here. I think the responsibility of growing our industry locally rests in our hands. So it’s time to get busy!

Recently we brought together our local screen professionals to do a film intensive to help build collaboration on the Sunshine Coast and Noosa. We hope our short film Showdown is the first of many purely collaborative screen projects here.

Our goal in this was to strengthen the film industry locally and support aspiring filmmakers who are looking for opportunities to broaden their skills. The project, called “Showdown,” started after many people expressed the lack of opportunities for growth in the screen industry in our local area. Screen Queensland talked about how they want to support our industry here, so I suggested we give them a reason to take notice by creating our own content.

We started by asking a bunch of local screenwriters for scripts. There were plenty of good ones, but nothing quite right, until Tonia Stangherlin helps us build out a simple story concept.

We need something that we could film in a day, could do on a zero budget and was a full story from start to end…

But even with zero dollars invested, the quality of the performances, production and final product were a testament to the hard work of our local community and how keen everyone is. It was amazing to see how much time and effort everyone gave to the project. I for one was very grateful.

I served as one of the mentors along with film legends Bill Hughes and Bill Missett. As we were shooting on our RED Gemini, there was a reasonable amount of upskilling we needed to do as most attendees were just solo operators and hadn’t yet touched a professional film camera. Plus first time on a decent sized set for most people, but great chance to experience production with a soft landing.

Our Own Sabrina Dervis Directed!!

“I’m so impressed that the whole community came together to create something amazing. I’ve really learned a lot from Bill Hughes and can say this won’t be my last film.”

And our editor Joel Fletcher is editing!! Plus he will be branching into new territory learning the Avid suite with Bill Missett (Hollywood veteran).

The Whole Community Chipping In

We had 20 filmmakers of all levels show up and participate. On top of that, a mixture of professional and amateur actors, from both inside and outside of the region, participated in kind to make the film possible. The production used 2 Noosa locations, Noosa Box Office and the Noosa Lions Football Club who gifted their venues without charge.

Members of the Sunshine Coast Screen Collective also showed support for the project, hoping that it will encourage further growth in the local film industry.

“This sits at the heart of what the Sunshine Coast Screen Collectives mission is to support, nurture and develop a thriving screen industry in the region. It was inspiring to hear of the success of the shoot and the experience everyone came away with.”

Even local filmmaker and still high school student Jonty Brown, from Go Tell Media, cut his family holiday short to shoot BTS for us, and all pictures are thanks to him.

It’s great to see how many people really want to pitch in to uplift the local film scene. We’re really excited with the potential here and we’ve only just started… Full crew this to come 🙂

Showdown is currently being edited and will be distributed through multiple film festivals nationally and internationally early next year… so check in on the Pluggas Facebook page (or Instagram) for release dates!!